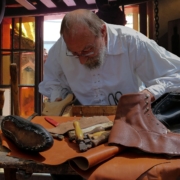 The invention of German surnames

The use of German surnames became popular during the Middle Ages (between the 10th and the 11th Century), with the purpose of identifying the social status of people. Surnames were selected – like everywhere else in the world – according to physical, working and family features. Using a surname was very useful for census surveys.

Only rich families could afford a surname

Originally, the surname was widely used and it was considered as a people’s first name. After that, surnames were used to recognize the families‘ origin. Having a family name was a prerogative of rich families, only. During the 12th Century, the use of surnames spread all over Europe, becoming common use everywhere.

How surnames were chosen

During the Middle Ages, Germany started to use surnames according to people’s professions. Let’s make an exemple: Meyer was first used for rather important and powerful people; it was later adopted with the meaning of „farmer“.

A list of the most famous German surnames and their translations