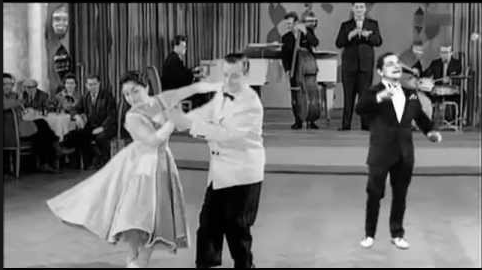 All western bands were strongly censored by the regime, above all rock’n’roll, which was not tolerated at all. Although listening to Elvis, Rolling Stones or Beatles was a weighty matter, the ban could be bypassed and their albums made it into DDR. The Soviet party’s chiefs worried about the fact that youngers were listening to this kind of music, so they decided to think a new dance up. The newborn dance was created to be caught on as opposed to rock’n’roll: Lipsi was born.

Soviet leaders felt disconcerted by dances which kept spreading out since the end of the 50s. They believed that Elvis‘ basin movements were almost pornographic; besides, a tête-à-tête dancing between teenagers was a not-well-identified danger for the social order. In order to prevent the leverage of this new kind of music over DDR teenagers, Soviet leaders were determined to compose new music and a dance, both to be suitable for the (chaste) education of Socialist youngsters. About Lipsi, René Dubianski composed the music, whereas the dance section was created by Christa and Helmut Seifert dancers. As reported by J.Elke Ertel in his book entitled „Walled In – A West Berlin girl’s journey to freedom„, the name was not chosen by chance. All three authors came from Lipsia, which was obviously situated in the Soviet bloc. Adapting the Latin name of the city, Lipsiens, they created an original name: not without good reason, they thought that the final „i“ would have given an „American“ and new-fashioned guise, more fashionable for teenagers. Once music was composed and the dance was created, the strict Soviet censorship let it pass: the challenge against the capitalist West could begin on the dancing floor, too.

A guideline to dance Lipsi, for a perfect party in Eastern German style

Surely, you are now curious to know how to dance Lipsi, which is essential to organize a DDR themed party. The lyrics, composed by Dublansky and reported by Anna Funder in  Stasiland: Stories from behind the Berlin Wall, go like this: «These days all the youngsters dance Lipsistep, just it; These days all of them want to learn Lipsistep: it is hip rhythm! Rumba, Boogie and Cha Cha Cha are old-fashioned; out of the blue, a new rhythm has come from nowhere and it is about to be still». The piece is in 6/4, as it was a speedy waltz. The Seiferts created a very simple choreography which is quite similar to a rumba blended with waltz as defined by Ertel, so that it could be easily and quickly learnt by the youth. The most curious aspect was that any kind of basin movement was strictly forbidden, only chest movements were permitted. Dancers almost never got close to each other, keeping safe distance: all that contributed to create an „innocent“ choreography. But even though it was beaten the drum for it, Lipsi didn’t hit the big time. Socialist teenagers continued to prefer Western rock’n’roll with its own unfettered rhythm and, listening to Lipsi, we can’t argue with them. If you want to learn more about the history of this questionable dance and about the everyday life during those years, you could visit the DDR Museum in Karl-Liebknecht-Strasse, Berlin.

Johann Trollman, the Sinti boxer who challenged the Nazi regime

German Classes from 192 € per month. Study at Berlino Schule. New classes...
Nach oben scrollen
We use cookies on our website to give you the most relevant experience by remembering your preferences and repeat visits. By clicking “Accept”, you consent to the use of ALL the cookies.
Cookie settingsACCEPT
Manage consent